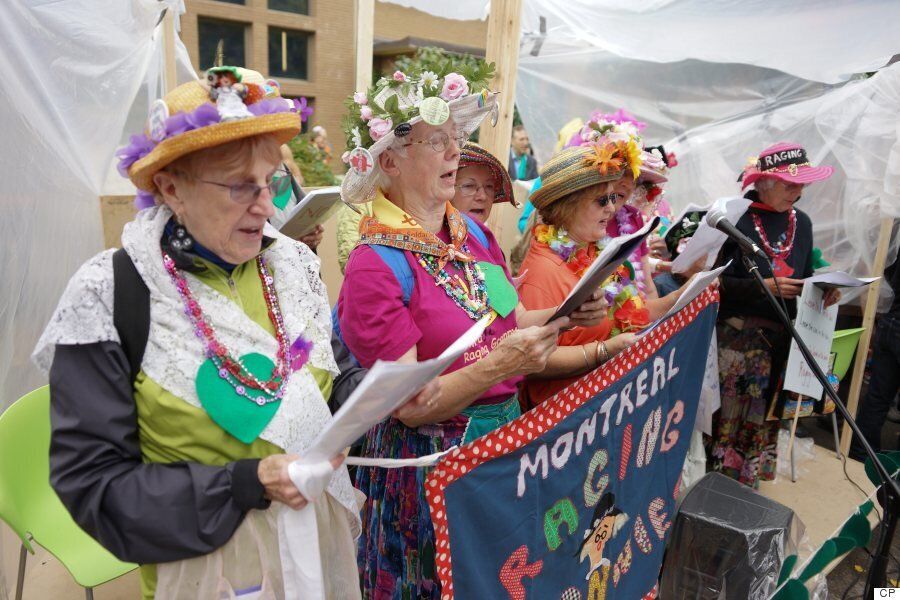 The first group of Raging Grannies came together in a loosely knit fashion as anti-nuclear activists calling themselves “NERT — Nuclear Emergency Response Team.” When they began in 1987, they were eleven white, nearly all middle-class, well-educated women. Some were counsellors, artists, teachers and businesswomen. The majority were politically progressive, although some of the women were simply afraid of the nuclear bombs that were believed to be on U.S. warships and submarines. The driving force for group action came from the sense of menace they felt from the visits of U.S. Navy nuclear-powered ships in Victoria Harbour, British Columbia, and the threat they posed to the city environment and its citizens. It didn’t take long, however, for the scope of issues to expand to include economic and social egalitarianism, and ecological concerns. It is remarkable to note just how creative and inventive these women were and how such a small group could fashion a persona that remains pertinent today and a medium for political expression across countries and cultures.

The Raging Grannies are activist organizations in many cities and towns in Canada, the United States, Greece, Japan, and Israel. They are social justice activists who, being older women themselves, dress up in clothes that mock stereotypes of older women while they battle social and political hotbed issues with humour, wit, intelligence, and powerful actions. They sing songs at protests and typically write the lyrics themselves, adding their political messages to the tunes of widely known songs. Their activism includes peace, environmental issues, and social justice. They frequently cause unsuspecting audiences to break into fits of laughter and can elicit shocked reactions and hostile expressions from those in positions of power. According to Dr. Maria Tucker of Pomona College, California, “they provide both a ‘festive critique’ and an extreme utopian vision of society at the same time, and reconfigure the world through laughter.” 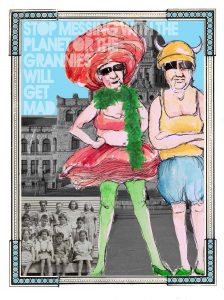 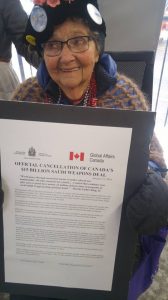 The Raging Grannies claim not to be entertainers, but undoubtedly they are performers. They make use of costumes, props, satirical songs, and creative actions that focus attention on information the authorities prefer we know nothing about. At other times their performances unveil the folly of a policy or course of political action. The Grannies have freed themselves from conventional style and often dress like clowns, sing off-key, yet their lyrics and actions speak to very serious matters. They use both theatre and songs to express their views and share a political position, and avail themselves of humour to promote social and political change. They want to express their views on political matters and make an impact on the social and political realities that face us all. The Raging Grannies have joined a chorus of voices in many societies that refuse to be silenced. They are interveners on the political landscape and intercede they do, with passion and aptitude and a measure of outrageousness.

American historian, Jacquelyn Dowd Hall, proposes that women’s resistance that is individual and non-dramatic tends to attract minimal attention. The Grannies are aware that in order to be heard they have to be seen and they appreciate the significance of creative dramatic actions to make themselves lively and exciting for print and television. They have created an idiosyncratic persona that allows for individual creativity and collective identity at the same time. They adorn themselves in frilly aprons, gaudy shawls, outrageous hats, colourful period clothing, and pink running shoes. Often, they add patent leather purses and long white gloves to show matronly dignity. The Raging Grannies refuse to be seen as “good girls” who traditionally have not been respected for their thoughts and ideas.They are feisty, opinionated, smart, tough-minded, and compassionate. They resist invisibility in a world where older women are overlooked and underestimated and their heartfelt social and political involvement comes from the wisdom of their female predecessors. 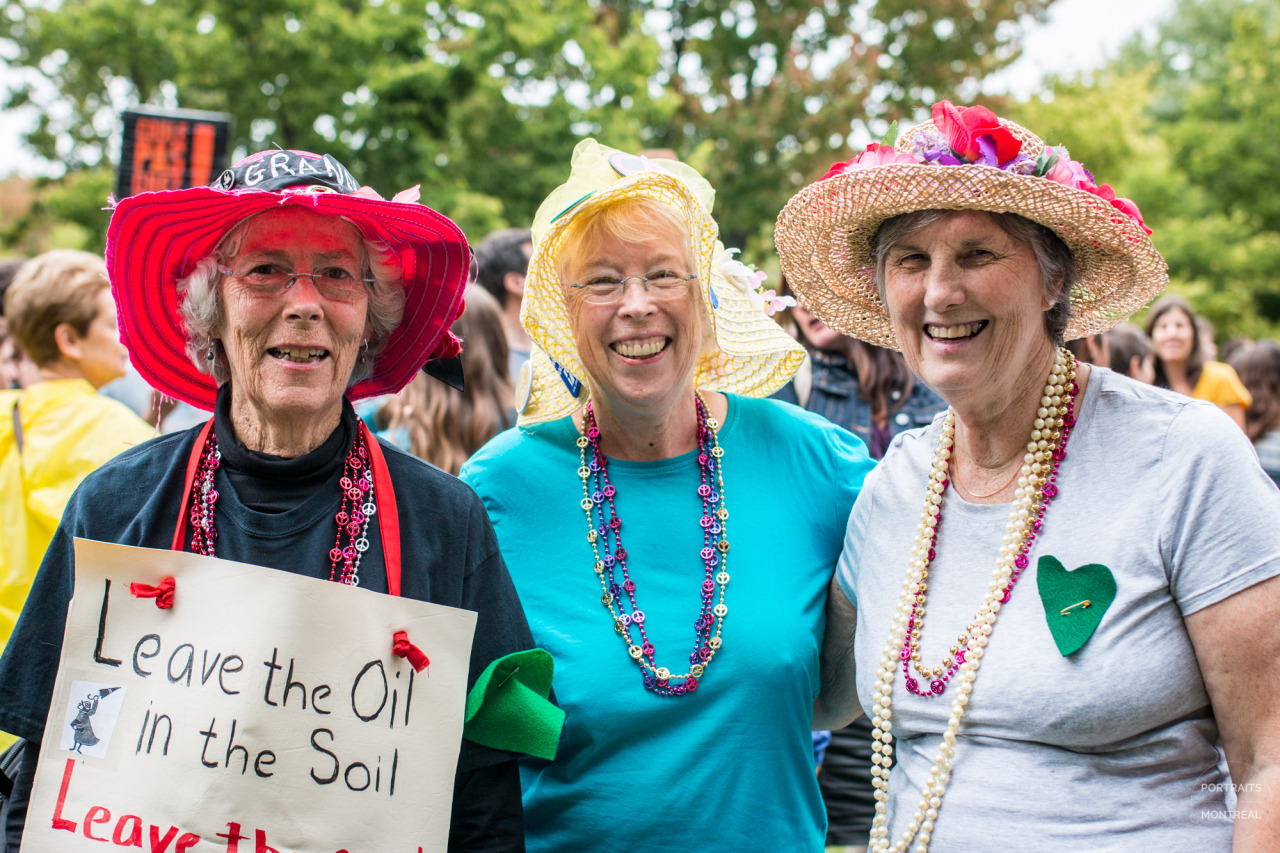 The Raging Grannies insist they will not shut up and will express their views through satirical songs and humourous performances. Humour and satire are at times acts of public protest. Political humour elicits a communal response of solidarity as laughing reveals common understanding even among strangers. Citizens can counteract the state’s efforts to make their thinking uniform and to frighten them into withholding criticism and dissent. According to Regina Barreca, professor of feminist theory at the University of Connecticut, women are more likely than men to make fun of those in high and seemingly invulnerable positions. Women look at those in power and laugh. For this reason, women’s comedy is more “dangerous” than men’s, because it challenges authority by refusing to take it seriously. It questions the way the world is put together and is often directed at the bizarre value systems that have been regarded as ‘normal’ for so long that it is difficult to see how ridiculous they really are. Granny Fran Thoburn believes that humour is a survival mechanism that women use when confronted with exceedingly tragic material. Humour seems to open avenues for connection with the audience and reveal common ground. Granny Ava Louwe says, “Humour breaks down barriers, eases the interactions. We’re basically preaching but not in a preachy way …. I think they’re disarmed a little bit at first, then they understand the message. In 1987, the first Victoria Grannies presented themselves to a parliamentary commission at the British Columbia Legislature that was reviewing a moratorium on uranium mining in B.C. To gain attention for their sense of the issue and to poke fun at pompous politicians, the Grannies presented their “briefs” in the form of women’s underwear in a laundry basket. When the crowd spontaneously laughed together, the message became clear: Power is not always sufficient to win the battle of wits. After all, how could a group of politicians forbid a crowd to laugh out loud. 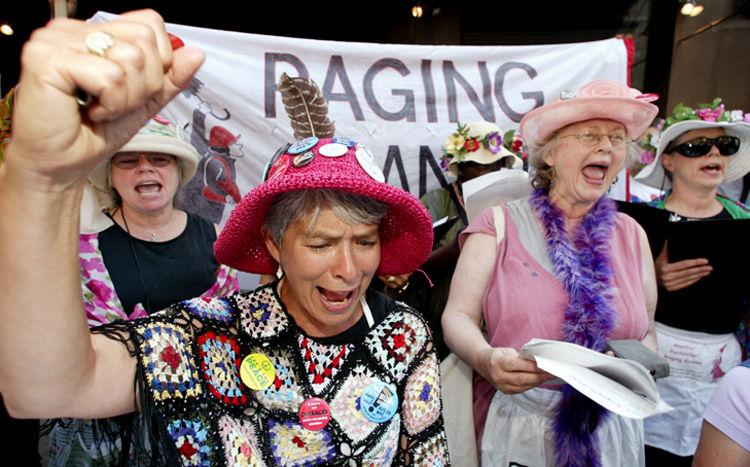 Raging Grannies are known for their dynamic and creative actions. As the threat of war in the Persian Gulf escalated in the early 1990’s, the original Victoria Raging Grannies, who were all WWII veterans, donned their “uniforms” and headed for the Canadian Armed Forces Recruitment Office. They asked to sign up for a tour of duty in the Gulf as a protest against risking young people’s lives for oil. The military officials were unable to discriminate on the basis of age, and had to prepare the paperwork to the great pleasure of the media. Raging Grannies in Montreal and Toronto also paid symbolic visits to their local army recruitment centres. In May 2005, the California chapter of the Raging Grannies was allegedly spied upon by the National Guard after it organized a Mother’s Day anti-war protest. California State Senator Joe Dunn launched an investigation into the matter and the intelligence unit was later shut down. In July 2005, five members of the group were charged with trespassing after they tried to enlist at a U.S. army recruiting centre in Tucson, Arizona. The women wanted to enlist and be sent to Iraq so their grandchildren could return home. Another group went to New York City, where they were arrested for blocking access to a recruitment centre in Times Square.They were subsequently acquitted of all charges. The Raging Grannies also took part in the “March Against Monsanto” in May, 2013 to protest against genetically modified foods. 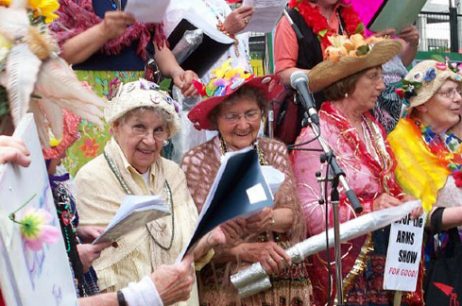 The original Raging Grannies were honoured on their 30th anniversary with a display at the Canadian Museum for Human Rights in Winnipeg, Manitoba. Several films, “Raging Grannies,” “Granny Power,” and “Two Raging Grannies,” and numerous academic articles talk about the Grannies and their work. They show and discuss how they challenge stereotypical ideas about activism and aging, and how the Grannies did not grow more conservative as they grew older. Two books have also been written about them: “Off Our Rockers” by Alison Acker and Betty Brightwell, and “The Raging Grannies: Wild Hats, Cheeky Songs and Witty Actions for a Better World,” by Carole Roy. The Grannies have crashed parties, receptions, meetings, official visits, governmental hearings and commissions, among others. They show us that humour, creativity, and a bit of fun can be powerful tools for movements working for social change in the ongoing battle for justice and peace. Let us ensure that their example lives on, and can serve to help other activists turn anger and despair into a meaningful political dialogue so we can glimpse new possibilities and imagine equitable solutions.