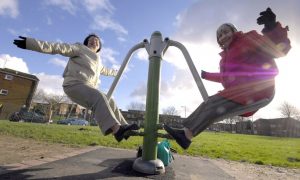 Playgrounds designed for seniors are growing in popularity worldwide. In 1995, the first playground for older adults is believed to have been built in China in anticipation of the 2008 Beijing Olympics. China adopted a national law that resulted in a nationwide physical fitness program that included elderly citizens. Once the law was in effect, parks throughout China incorporated equipment all citizens could use. As more people came to visit China from other countries and became aware of the special park apparatus and increased well-being of China’s seniors, they began to adopt similar practices in their communities.

In 2003, Finland designed a playground specifically for seniors and carried out a scientific investigation to measure the benefits. By 2004, similar parks started cropping up in Japan and they became known as Nursing Care Prevention Parks. The very first European city to open a senior playground (a.k.a. outdoor fitness park) was Berlin, closely followed by Blackley, Manchester in 2008. The Dam Head Park in Manchester features low-impact exercise equipment where seniors can work their hips and swing their legs without injury. It’s the U.K’s first playground designed for pensioners with the slogan, “You’re Never Too Old to Play.” There has been a senior playground in Hyde Park since 2010 which includes six pieces of workout equipment from Denmark, such as a stationary bike, a cross-trainer and a sit-up bench. Spain has roughly 600 senior playgrounds, with more being planned, and there are 300 installations in Greater Barcelona alone. Parks were later built in Canada and then in the United States. Canada’s Riverside Fit Park in the B.C. City of Courtenay features 16 pieces of outdoor fitness equipment including: a surfboard station for balance, an outdoor elliptical trainer and a variety of massage equipment. The motto on the yellow sign in front of the park reads: “Every Move is a Good Move.” It is one of 18 parks built in communities throughout B.C. as part of the Seniors Community Parks Initiative. Also, in Sault Ste. Marie, Ontario, the management of the Finnish Resthome is hard at work raising funds to build a seniors fitness park designed by the specialist company, Lappset. While the U.S. has some catching up to do, the idea has caught on there and outdoor senior playgrounds and multigenerational fitness parks exist in some 15 cities, from New York to San Antonio and Miami. Today, senior citizen playgrounds are found globally. 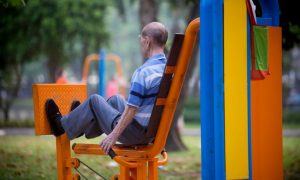 In the United States, the approach to playgrounds for the elderly is a bit different inasmuch as playgrounds are being built for multiple generations, not just for seniors. The nonprofit organization KaBOOM! which generally builds playgrounds for children, partnered up with the Humana Foundation to build 53 multigenerational playgrounds across the country. Many of KaBOOM’s playgrounds are in low-income communities. According to spokesperson Sarah Pinsky: “One specific benefit of a multigenerational space is you get children and seniors interacting in ways they might not otherwise. Plus, it’s a great opportunity for children to see role models of active seniors.” Play can be a very uplifting mutual interest for seniors and the children in their lives. In addition to the cognitive and physical benefits of play, it can also reduce chronic stress in older adults and children alike. 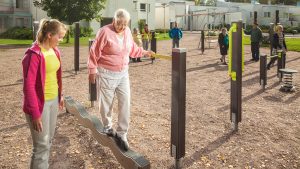 The equipment in most of the senior playgrounds is designed by the Finnish company Lappset, who have sold thousands of their exercise machines for seniors worldwide. There are four main types of machines: to exercise the upper body, leg muscles, stomach and legs in turn. The machines are claimed to be safe for people of all fitness levels and can be used with everyday clothes and shoes rather than designer gym outfits. The playgrounds for seniors have treadmills, skiers, space walkers and body twisters, in sturdily built designs and vivid colours. Most people over-60 did not grow up with modern-style gyms and tend to shy away from an atmosphere of rigorous training and super-fit bodies. Senior playgrounds usually group together low-impact exercise equipment that promotes balance and flexibility in the hope of decreasing falls, which can be deadly for the elderly. The equipment also trains people to increase their range of motion so that they can perform routine activities, such as bending down and retrieving an object that fell on the floor. The best installations also help seniors to build muscle strength and tone and improve their manual dexterity. A 2004 study by Finland’s University of Lapland investigated a group of 40 seniors age 65 to 81 who attended a senior playground for three months of regular use, 90 minutes per week. The study found improvements in balance, speed and coordination. The seniors were more confident and moved around faster. They felt empowered to manage physical obstacles when they encountered them and said they had fun taking on these physical challenges in the company of other elderly people. 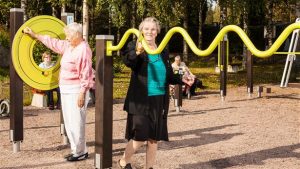 Playgrounds built for seniors or multigenerational use also serve as places for social interaction. Seniors can become lonely and isolated, causing them to fall into depression. By visiting a senior playground, you can interact with others and make new friendships. The face-to-face and multi-user equipment serves as an ideal place to meet new people and form bonds and once you have connected, you are likely to return to the park to meet again. Playing outdoors relieves stress and improves our mood. Recent studies have shown that seniors who exercised outdoors scored higher on measures of self-esteem, vitality and enthusiasm than older people who exercised indoors. And, a 2012 study of older adults found that those who exercised outside exercised longer and more frequently than those working out indoors. Add the element of play and you have the ideal solution for what sometimes ails the older folk. A well-designed senior or multigenerational playground encourages happiness and light-hearted fun. Let’s get out there and extend our capabilities, just as we did when we were children. 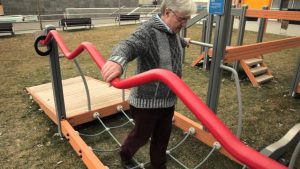